What is a Brute Force Attack? 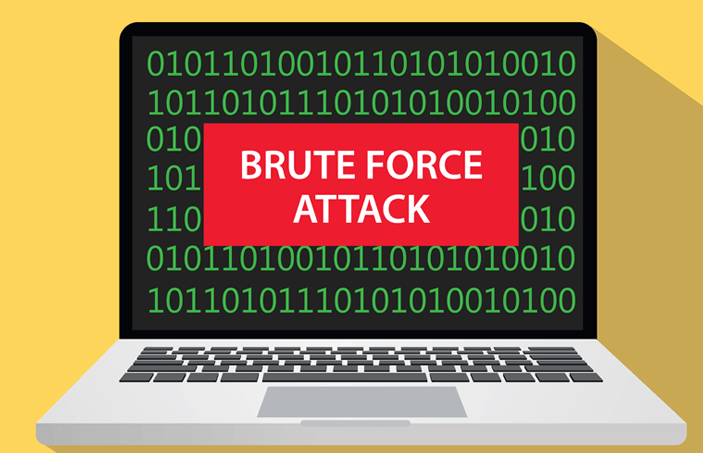 What is Bruteforce attack?

Compared to other techniques used by threat actors, brute force attacks do not need vulnerabilities on a website to work. Instead, these attacks depend on users having weak credentials to succeed. The ease and simplicity of the tactic are why it is pretty popular among enterprising cybercriminals.

A brute force attack is a hacking method where hackers use a trial-and-error method to decode passwords, login credentials, and encryption keys. It is a simple yet reliable tactic for gaining unauthorized access to individual accounts and organizations’ systems and networks. The hacker tries multiple usernames and passwords, often using a computer to test several combinations until they find the correct login information. Other common targets for brute force attacks are API keys and SSH logins. Brute force password attacks are carried by scripts or bots that target a website’s login page.

The name “brute force” comes from attackers using repetitive, forceful attempts to gain access to user accounts. Despite being an old cyberattack method, brute force attacks are tried and tested and remain a popular tactic with hackers. Though surprisingly simple, brute force attacks have a high success rate. Depending on the length and complexity of the password, cracking it may take from a few seconds to many years.

What are the strengths and weaknesses of brute force attacks?

The advantage of brute force attacks is that they are relatively simple to perform, and given enough time and the lack of a mitigation strategy for the target, they always work. Every password-based system and encryption key out can be cracked using a brute force attack. The amount of time it takes to brute force into a system is a useful metric for gauging that system’s level of security.

If the target string is sufficiently long, it could take brute force attacker days, months, or even years to decode a properly randomized password. As a result of the current trend of requiring longer passwords and encryption keys, brute force attacks are quite a bit difficult. When good passwords and encryptions are utilized, attackers typically try other methods of code breaking, such as social engineering or on-path attacks.

Brute force hacking requires plenty of patience. An attacker may take months or even years to successfully crack a password or encryption key. Cybercriminals have several motivations for enacting brute force attacks. The potential for personal profit or gain is the primary one. However, the potential rewards are:

Exploit advertisements and data: A hacker may launch a brute force attack on a website or multiple websites to earn financial profit from advertising commission. Common methods include:

Personal data theft: Hacking into a user’s personal accounts can provide everything from bank accounts to tax information, and confidential medical information could be found online. Access to an account enables an attacker to spoof a person’s identity, steal their money, sell their credentials to third parties, or use the information to launch various attacks. Personal data and login credentials can be stoled through corporate data breaches that see attackers gain access to organizations’ sensitive databases.

Ruin a website’s reputation: Brute force attacks are launched to steal data from an organization, which not only costs them financially but also causes reputational damage. Websites can also be targeted with attacks that infest them with obscene or offensive text and images, thereby denigrating their reputation, which could lead to them being taken down.

How to Protect Against Brute Force Attacks

Organizations can strengthen cybersecurity against brute-force attacks by using a combination of strategies, including the following:

Limit failed login attempts. Protect systems and networks by implementing rules that log a user out for a specified amount of time after repeat login attempts.

Encrypting and hashing. 256-bit encryption and password hashes exponentially increase the time and computing power required for a brute-force attack. In password hashing, strings are stored in a separate database and hashed. So, the same password combinations have a different hash value.

Implement CAPTCHA. These prevent the use of brute-force attacking tools, like John the Ripper, while still keeping networks, systems, and websites accessible for humans.

Enact two-factor authentication. This is a type of multifactor authentication that adds an additional layer of login security by requiring two forms of authentication — as an example, to sign in to a new Apple device, users need to put in their Apple ID along with a six-digit code, which is displayed on another one of their devices previously marked as trusted.

A good way to secure against brute-force attacks is to use all or a combination of the above strategies.

What are examples of bruteforce attacks?

One reply on “What is a Brute Force Attack?”